I have quite a few metaphorical hats I put on every day… Wife, writer, mom to my puppies, teacher, student, feminist, Cards fan (that one depends on the season), but one of the first I don each day is “American.” I’m proud of where I live, of my culture, of what it really means to be an American. I support my country no matter who’s in office (I don’t jump off that bandwagon even whether I voted for him or not), but I also wholeheartedly support my first amendment rights and was infuriated when people sent the Dixie Chicks hate mail over what Natalie said. Death threats? You’re preaching being a good person and being patriotic by sending death threats? Really?

I believe people should hover more toward the middle on all topics; it’s hard to maintain harmony with so many extremist attitudes. That being said, there’s a situation in the Sonoran Desert in Arizona that should rile Democrats and Republicans alike. It’s an American issue. The pictures speak for themselves, but the message they’re sending is clear: we want to come to your land for its benefits, but we’re not honoring her in our quest for freedom.

I’m empathetic to the plight that drives people to the U.S. I’m also aware that we don’t make it easy to become an American anymore. We no longer embody the Ellis Island mantra: "Give us your poor, your tired, your huddled masses longing to be free..." However, if you want to come to America, to truly BE an American, you must first possess the respect to treat her with dignity. This is the only planet we have, and this biohazard in the Sonoran Desert is yet another obstacle we must face in order to prevent our own demise.

We, as a human race, are short-sighted, self-serving, and ignorant, and it’s ultimately going to be the death of us. 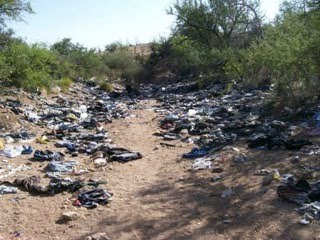 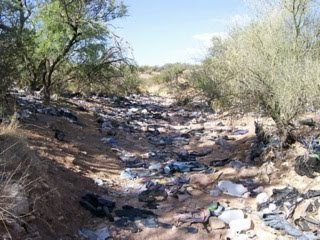 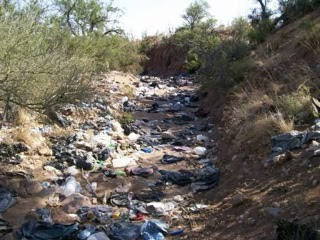